Advanced materials can contribute to the reduction in cost, increase in performance and extension of lifetime of the low-carbon energy technologies such as batteries, supercapacitors and solar cells. Thus, there is an urgent need for multi-functional and sustainable materials designed to provide a specific function in the final product. HPC can speed-up the entire process needed to identify new materials and to optimize them for the final use (Materials Roadmap). In particular, the design of advanced materials needs to consider atomic-scale chemistry and how it affects the physical properties at larger scales till the device. The Energy Materials objective in EoCoE-II will focus on three specific flagship applications in energy storage and production respectively: libNEGF (high efficiency silicon solar cells), Metalwalls (supercapacitor modelling) and KMC/DMC (organic/perovskite photovoltaics).

In order to pursue this objective, the Materials for Energy Scientific challenge is divided in three main tasks:

This task highlights the scientific objectives and roadmap for optimizing silicon solar cells to increase in performance and extension of lifetime. Amorphous-crystalline heterointerfaces play a crucial role in the photovoltaic operation of silicon heterojunction (SHJ) technology, but the microscopic mechanisms of transport and recombination mechanisms at the interface are still poorly understood. The purpose of the present task is to understand the transport mechanisms underlying photovoltaic devices based on SHJ technology by simulating at atomistic resolution amorphouscrystalline heterointerfaces. Medium and large c-Si/a-Si:H interface models will be build up from classic molecular dynamics (MD) simulations and first-principles calculations. Ab initio electronic properties of the c-Si/a-Si:H interfaces will be calculated. Starting from the first-principles calculations, tight-binding Hamiltonians will be represented in a basis of localized Wannier functions. Next, non-equilibrium Green’s functions (NEGF) formalism will be used to analyse the effect of interfaces on the carrier transport and dynamics in silicon solar cells. Electron-photon and electronphonon scattering processes will be taken into account.

This task focuses on optimizing capacitive blue energy electrodes and thermo-electrochemical devices. Electric power production from salinity gradients harvests the free energy lost during the mixing of river with sea water in estuaries. The main technologies developed for this purpose to date exploit the electric potential differences applied across membranes, but another approach based on capacitive mixing was recently proposed. The first objective of this project will be to ascertain the best electrode structure which optimizes such a blue energy production. Thermo-electrochemical devices employ the variation of the redox potential of an active species with temperature to convert a gradient into electricity. Ionic liquids were recently proposed as optimal media for performing such an energy harvesting, and the second objective of this task will be to find compositions that will enable optimal performances. In both cases, a fundamental understanding of the cation and anion adsorption at the surface of the electrodes is essential. The challenge for this task is that simulating the interfaces requires the rigorous accounting for the interactions between the atoms of the electrodes and the adsorbed species. Due to the large size of the simulated systems for the final application, it is not possible to use electronic density functional theory (DFT) for such calculations. We therefore aim at developing new force fields for classical molecular simulations. The parameterization of these force fields can be made based on a series of electronic DFT calculations. However, it was shown recently that the commonly used exchange-correlation functionals may yield very different results for the adsorption energy of the molecules. We will overcome this problem by performing a series of Quantum Monte Carlo (QMC) reference calculations in order to benchmark them on the adsorption energies. Once the DFT functional is benchmarked on the QMC reference, a large amount of calculations will be performed to fine-tune force fields for classical molecular simulations with Metalwalls/MDFT codes. These two codes aim at simulating electrochemical systems with explicit electrodes, using either molecular dynamics or classical density functional theory to sample the configurational space of the solvent.

This task deals with the development of a flexible and modular scheme for the multiscale modelling of electronic and ionic transport in materials for next generation photovoltaic devices. This will be built on (augmented versions of) pre-existing, MPI parallelised Python frameworks, namely Firedrake and PPMD. The scientific goals of this project, as stated in the EoCoE proposal, are:

– Understand the complex processes of charge transport in a perovskite solar cell thanks to the implementation of a semiclassical approach based on solving the Boltzmann transport equation in submicron inorganic semiconductors (Device Monte Carlo, DMC code). Both KMC and DMC codes are exascale flagship codes are part of tasks in Scalable Solvers Technical Challenge of EoCoE-II

Metalwalls is a classical molecular dynamics code aiming at simulating electrochemical cells. It treats electrode as metallic systems held at constant potential and includes polarization effects for the liquids.

libNEGF is a general library that calculates Equilibrium and Non Equilibrium Green’s Function and related quantities in open systems, within an efficient sparse iterative scheme. The code will be optimized to describe photon-carrier dynamics (generation, transport and recombination) in nanostructured regions and at complex interfaces, and used to execute advanced simulation of high-efficiency solar cell devices for different input biases.

The most important aspect of the Material for Energy scientific challenge of EoCoE is to join scientific and technical competences from the most important institutions and research centres in Europe in order to discover novel materials that allow the production of electricity by harvesting energy from sunlight, salinity gradients and temperature gradients. In order to achieve this challenging purpose, we are developing codes based on theories at different length scales able to be run efficiently on the next generation of supercomputers that are reaching exascale computing performance, i.e., supercomputers able to perform one billion billion (1018) floating-point operations per second.

Thanks to the EoCoE project, four different European Institutions (CIEMAT, CNR, ENEA and FZJ) collaborated in understanding the transport mechanisms underlying photovoltaic devices based on the Silicon Heterojunction technology. Amorphous-crystalline heterointerfaces play a crucial role in the photovoltaic operation of the devices, but the microscopic mechanisms of transport and recombination mechanisms at the interface are not yet well understood. The main purpose here is to design and develop cutting-edge computational methods and HPC-ready software for photovoltaic device simulations at atomistic resolution in the most insightful and predictive way. The results look very promising for further research since we have simulated the transport at the interface between passivated Silicon and amorphous Silicon by taking into account the presence of defects in a realistic structure, and increased the speed of specific algorithms used by the code more than six times. Moreover, EoCoE has signed a MoU with MAX CoE to collaborate on the optimization of the pre-processing of the electronic properties (using QUANTUM ESPRESSO) before inserting the definition of these properties in the transport calculation.

Another objective reached by the collaboration of CEA and Maison de la Simulation is to assess the best electrode/electrolyte combination to optimize the electricity production in electrochemical systems. Electrical power production from salinity gradients harvests the free energy lost during the mixing of sweet water with salty water in river estuaries. The main technologies developed for this purpose to date exploit the electric potential differences applied across membranes. We analyse an alternative approach based on capacitive mixing. As part of this approach, we are investigating the electrode structure which optimizes a blue energy production, and which is the compositions that will enable optimal performances of thermo-electrochemical cells. Five-hundred structures never seen before were passed through the artificial intelligence model to predict the vertical energy gaps between the reduced and the oxidized species, necessary to predict electrochemical properties (e.g. redox potentials). Such a tool has the potential to accelerate the research of the best electrode/electrolyte combination to optimize the energy harvesting process.

Working with the University of Bath (research group of Prof. Alison Walker), we have been able to achieve good results on optoelectronic devices based on two classes of emerging photovoltaic materials, namely organic molecular semiconductors and metal-halide perovskite semiconductors. Both types of cells are cheap to make but have some stability concerns. Organic solar cells are only 12% efficient whereas perovskite solar cells are close to 23% efficiency. However, perovskite cells are notorious for poor stability and current-voltage hysteresis. Our purpose is to design and develop HPC ready software for device models of both cell types extending the simulations to systems of several thousands of atoms to understand degradation mechanisms and find materials and architectures that enhance stability.

The specificities of these two materials necessitate different computational approaches. Therefore, the development, implementation and application of simulation methodologies amenable to studying phenomena at a broad range of length and time scales has evolved. We are developing a pair of Monte-Carlo codes (KMC and DMC). Notably, algorithmic improvements and other optimization work on the KMC code enabled access to organic molecular semiconductors models that contain millions of charges with good parallel scaling. We demonstrated good performance scaling for 128 million charges up to 128 nodes on Intel and ARM architectures, making possible to model doped organic semi-conductor containing 20,000 charges, while the previous state of the art code, using approximate electrostatics, could perform KMC simulations with systems containing less than 100 charges.

Metal-halide perovskites are currently attracting intense interest for application in optoelectronic devices, due to their remarkable efficiencies in spite of low temperature synthesis methods. In order to test the influence of large polarons on the value of phenomenological parameters, we derived expressions for scattering of polarons by ionised impurities and acoustic phonons, and implemented them in the DMC simulator in order to compute and compare the temperature dependent mobilities of polarons and band electrons in three metal–halide perovskites. We investigated the role played by polaron formation and we found that the main effect is to reduce the mobility of electrons, but the temperature dependence is not altered. This is important for understanding the degradation mechanisms and for the design of solar cells based on metal-halide perovskites with enhanced stability in the performance of the device.

The figures below are snapshots of the results published in scientific articles. Please refer also to the publications section for more details. 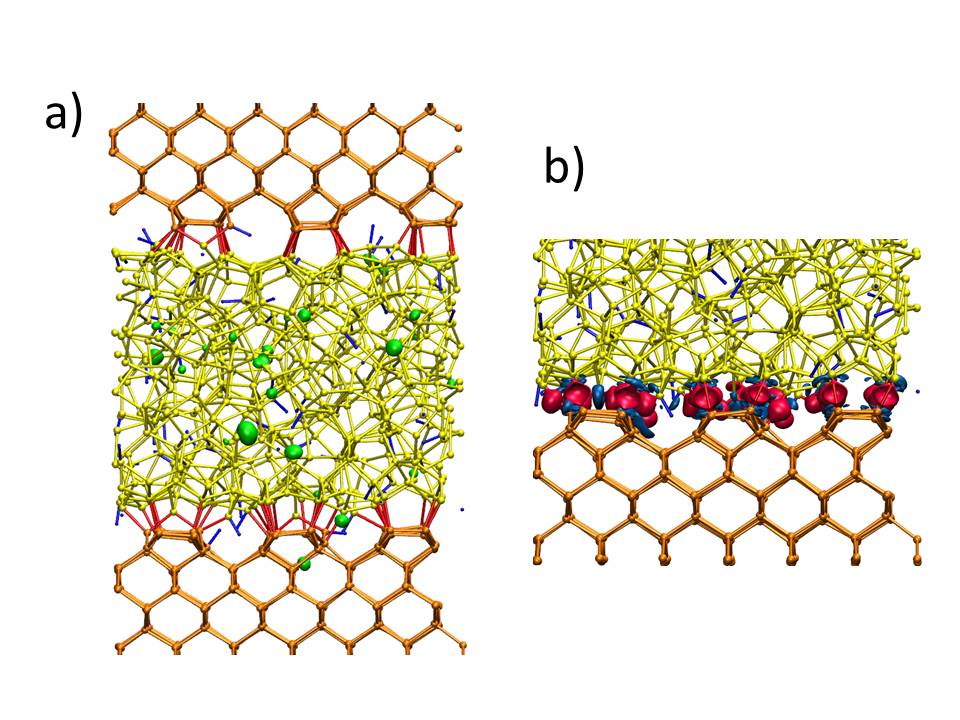 Fig. 1. Towards exascale simulations of a-Si:H/c-Si interfaces. a) Local density of states (green isosurface) of the intragap states of a-Si:H/c-Si interface at room temperature. They correspond to defect states localized both in the bulk of a-Si and at the a-Si:H/c-Si interface. The Silicon atoms and their bonds are in orange in the c-Si side and are in yellow in the a-Si:H side, Hydrogen atoms and bonds with Silicon atoms are in blue. Bonds between c-Si and a-Si are in red. a-Si = amorphous Silicon; c-Si = crystal Silicon. b) The c-Si/a-Si:H interface and the difference at of the charge density between the total system and the c-Si and a-Si:H systems considered as isolated slabs at the end of the room temperature thermalisation. Red (blue) isosurface is positive (negative) difference of the charge density. The electron charge is accumulated along the c-Si/aSi:H interface and depleted from the nearby c-Si and a-Si:H surfaces. (Article from Francesco Buonocore, Massimo Celino, Pablo Luis Garcia, Simone Giusepponi, Rafael Mayo-Garcia. WSC 20: Proceedings of the 2020 Winter Simulation Conference, IEEE press (accepted), http://meetings2.informs.org/wordpress/wsc2020/) 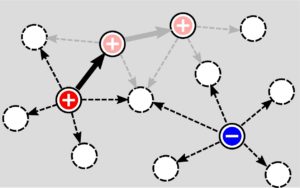 Fig. 2. Organic and perovskite solar cells. Schematic sketch of one KMC step, which consists of calculation of the propensities for all possible hops (dashed arrows) and moving one particle to a new site after accepting a particular hop (solid arrows). Subsequent steps are shown as grey arrows. Kinetic Monte Carlo (KMC) simulations of a system of (electrically) charged particles require many evaluations of the change in electrostatic energy associated with “possible” moves of individual particles, but only one such move is selected per KMC step. (from article by W. R. Saunders, J. Grant, E. H. Muller and I. Thompson, J. Comp. Phys. 410, 109379 (2020) DOI: 10.1016/j.jcp.2020.109379)