Wind power capacity will have the second most successful growth (after solar power) over the period 2019-2024 (source: IEA), with an expected growth from 309 GW to 377 GW of world-installed capacity. A key role in this spectacular advance has been the increasing understanding of the turbulent flow in the wind farms, thanks to the ever-growing computational power and the improved simulation algorithms. In EoCoE-II, the ambition is to be able to simulate a full wind farm over complex terrain with up to 100 wind turbines. Ultimately, this will require increases in the size of the problems to be solved and the amount of computational resources of at least two orders of magnitude. The main goal of the wind scientific challenge is to bring the flagship Alya code to Exascale in order to tackle this Large Eddy Simulation (LES) flow problem. Furthermore, the rotating wind turbine blades will be resolved to account for their effect on the flow via a full rotor model. Blade deformation may also be included via the use of sliding meshes. These combined tasks all pose daunting technical challenges for the kernel solvers and meshing algorithms in Alya, for which the EoCoE-II consortium is already well equipped.

Alya is a high performance computational mechanics code that solves complex coupled multi-physics problems, mostly coming from the engineering realm. Alya will be deeply refactored in order to be able to address heterogeneous computing nodes. A very strong effort on linear algebra is planned for both the fluid and the solid problems handled in the two tasks foreseen in the wind scientific challenge.

Meso-NH is an open-source non-hydrostatic mesoscale atmospheric model developed by the Centre National de Recherches Météorologiques (CNRM – Météo France/CNRS) and the Laboratoire d’Aérologie (LA – UPS/CNRS) [1]. This LES model has recently been extended to wind farm flow simulations by IFP Energies Nouvelles, using an Actuator Line Model (ALM) of the wind turbines [2]. It enables to simulate the interactions between wind turbines and surrounding atmospheric flows from meso- to micro-scales. A realistic atmosphere can be simulated with this model, including roughness effects, thermal effects, complex terrains, or even complex micro-physical phenomena.

waLberla is an exascale-enabled multi-physics software framework. In EoCoE-2 its Lattice Boltzmann module will be employed as alternative algorithm for modeling wind turbines and wind farms. WaLberla has shown scalability up to 2 million parallel threads and can be used for simulations with up to a trillion (1012) mesh cells that are partitioned as a forest of octrees.

The wind scientific challenge has two main tasks. The first one is related to the CFD simulation of flow over a wind farm, commonly known as microscale simulations in the wind community. This kind of simulations is performed by energy companies interested in developing a wind farm to assess the wind resource and help identify the best locations for the wind turbines. BSC has been collaborating with Iberdrola, one of the most prominent investors in wind energy, for more than five years. We have adapted our code, Alya so that it can be used directly by the wind experts in Iberdrola. The industry typically relies on RANS simulation for wind resources assessment which is robust and does not require substantial computational resources. However, it is well known that RANS has limitations for the simulation of separated flows that commonly occurs in complex terrain. Our first objective within EoCoE-II is to further develop the LES implantation in Alya so that it can be used for wind resource assessment over complex terrain. LES is more accurate than RANS but also significantly more computationally demanding. It is the logical tool to be used with the advent of Exascale Supercomputers. Figure 1 shows a volumetric rendering of the velocity obtained with a LES simulation using Alya over the Bolund cliff, one of the most well-known benchmarks for flow over complex terrain.

Our second objective is to perform LES simulations of the rotating wind turbine blades commonly known, as full rotor simulations. The simulation of the rotation of the blades is possible thanks to a sliding mesh approach that is being developed within EoCoE-II. The blade deformation will be taken into account by using Alya’s solids module and its Fluid-Structure Interaction capabilities. Figure 2 shows the Q-vorticity isosurfaces for the flow behind the rotating blades of an NREL-VI wind turbine. Despite such simulation could also have some interest for wind energy companies, we expect that the main interest for this technology should come from wind turbine manufacturers. EoCoE-II has obtained a support letter from Vestas, and we expect that we can provide the industry with a useful technology by the end of the project.

Large-eddy simulation (LES) has emerged as a valuable tool for the simulation of turbulent flows at high Reynolds numbers and complex geometries, typically encountered in practical engineering applications. In this approach, the larger dynamically important eddies are directly resolved, whereas the smaller ones are assumed to have a universal character and are therefore modeled.

Nearly all real-world problems include a boundary that acts as a wall where the velocity is zero. In the case of Atmospheric Boundary Layer (ABL) flows that are of interest for Wind Energy, the ground is the wall. For wall-bounded flows,  the computational cost becomes prohibitively expensive since the dynamically important eddies in the near-wall region become smaller as the Reynolds number increases, and thus, extreme mesh refinement is required to resolve them. Modeling the inner part of the boundary layer with a semiempirical wall model, instead of resolving it, is therefore a key ingredient for high Reynolds numbers flows to be solvable with LES. Even with the most powerful Exascale Supercomputers that will be available in the upcoming years, wall resolved LES simulations of Atmospheric Boundary Layer flows will not be feasible.

In a recent publication entitled “Wall-modeled large-eddy simulation in a finite element framework” we have improved the wall modelling implementation that has traditionally been used by the Computational Fluid Dynamics Finite Element community. When comparing with the traditional approach the error in the prediction of the mean velocity for high Reynolds number flows has been reduced by more than an order of magnitude. For Atmospheric Boundary Layer flows that have a particularly high Reynolds number this has been a key enabler. The traditional approach used by the Finite Element community would predict an average velocity that is approximately twice the correct value, rendering the results of little or no real use. With the improvements we have implemented the error is significantly reduced and Finite Elements become a very competitive solution for ABL flows. For y/H >0.06, that covers the region of interest of wind energy applications, an excellent prediction is obtained. 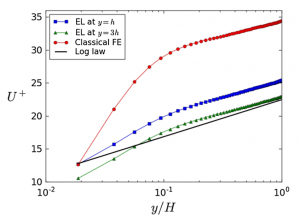 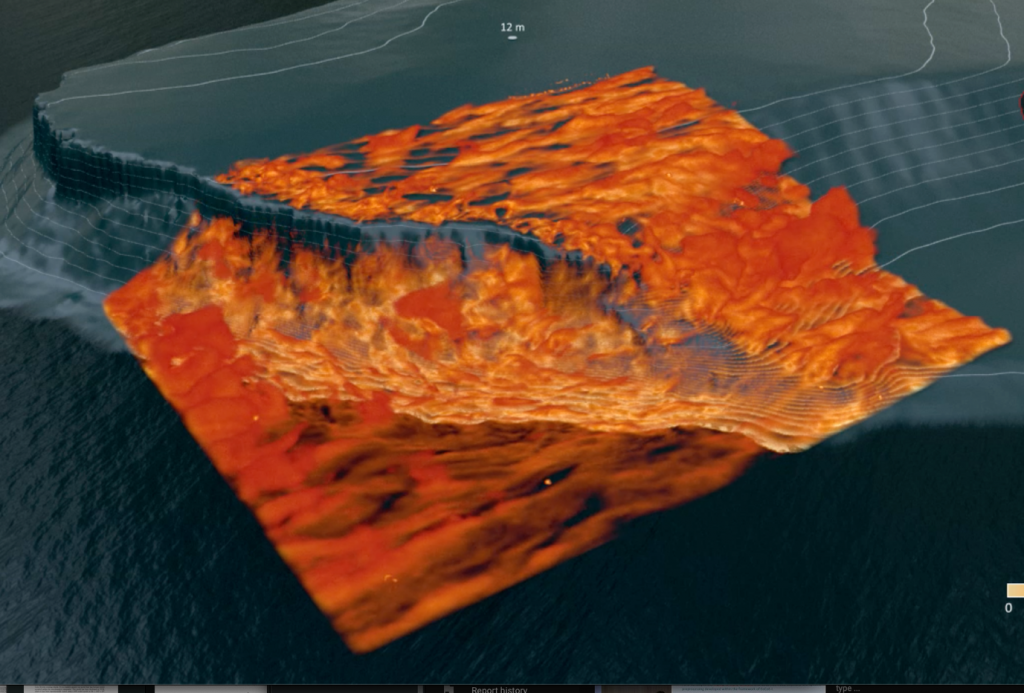 Figure 4 – Flow over the Bolund Hill

In order to better understand the flow physics in a wind farm, we need to compute the detailed flow characteristics like wind velocity, turbulent eddies, etc. in a reasonable time and with enough precision. At this stage only high-fidelity Navier-Stokes based Large-Eddy-Simulation (LES) solvers or even meteorological LES flow solvers are able to accurately reproduce such flows, and have been used rather extensively in the wind energy community. Such simulations enable the understanding of some flow phenomena and are very helpful in the improvement of analytical models. However, due to their high computational cost, only canonical cases are considered (single to few turbines), and full wind farm simulations have only been considered either for demonstration purposes or employing mesh resolutions that are not sufficient to accurately represent the flow physics.

To address this issue, FAU University together with IFPEN are currently implementing actuator-line based wind turbine models in the waLBerla LBM flow solver, with particular attention devoted to the collision operators. Whereas the Lattice-Boltzmann method is well-suited for lower Reynolds number regimes, standard collision operators suffer from instabilities at the high Reynolds numbers observed in wind energy applications. To obtain a stable and meaningful simulation, several investigations are conducted, typically using the Single and/or Multiple Relaxation Time collision operators together with different subgrid-scale models, such as e.g. the Smagorinsky and the WALE models. As this approach failed to stabilize the simulation sufficiently, more advanced collision operators, namely entropic, regularised, and cumulant-based are studied. For the wind turbine application, the cumulant Lattice-Boltzmann methods performed best in terms of stability. They have already been validated considering single or tandem wind turbines, and are being ported to Graphical Processing Units (GPU). The following figures illustrate the obtained results using CPU and GPU resources for the NewMexico wind Turbine. For this compressible simulation, Smagorinsky model is used with D3Q27 stencil and SRT collision operator. The simulation on one GPU (NVIDIA P100) substantially and expectedly outperforms the simulation on one CPU core (Intel Skylake G-6140) without any accuracy loss. Eight full nodes, i.e. 144 CPU cores, are required to obtain the same time-to-solution for both CPU and GPU systems. 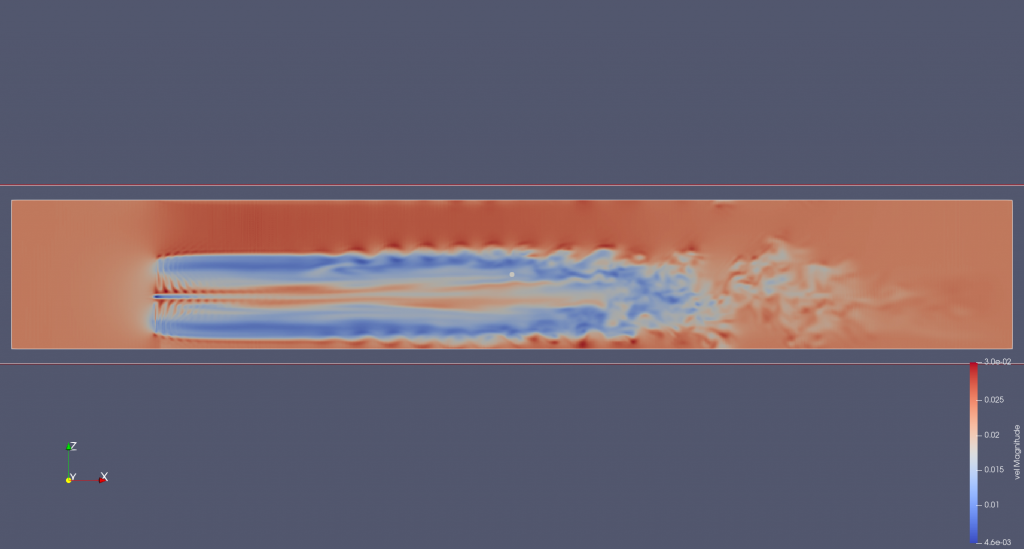 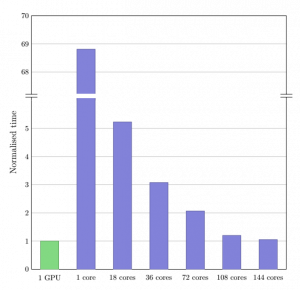 All  EoCoE-I and EoCoE-II publications are available here (openAIRE). If the link does not work do a search here under “projects” and with term “[EoCoE-II] Energy Oriented Center of Excellence : toward exascale for energy (824158)”.